I haven’t introduced meself. Rubeus Hagrid, Keeper of Keys and Grounds at Hogwarts.

Thus far I’ve done a passable job at explaining what a network is, and how devices talk to one another.  What I’d like to do today is tie those two pieces together and introduce you to the most important member of your household Local Area Network – the router.

Like Rubeus Hagrid from Harry Potter, your router is the keeper of the keys and grounds inside your Local Area Network. Nobody gets in and out of your little Hogwarts castle without first going through the gatekeeper.  Technically speaking, this analogy holds water – though if Charlie Weasley’s two friends can ride a broom right into Hogwarts and fly off with a caged dragon, one would question the competency of Hagrid in this role.   The case against Hagrid could then be clinched by asking where his precious three headed dog wound up after the capture of the Sorcerer’s Stone (or Philosopher’s Stone if you sip tea frequently with your pinky held aloft).  Fluffy and Norbert (or Norberta) would agree – Hagrid is the ultimate deadbeat Dad.  It is no small wonder Professor McGonagall was dismayed by the news that Hagrid was transporting the baby Harry to the Dursleys.  But now that I’m off in the weeds, allow me to refocus.

Your router is the gateway between your own Local Area Network and anywhere else.  Or to say it a less technical way, your router is the doorway from your stuff and other peoples’ stuff.  We have already talked about IP Addresses and you understand now that your private LAN has a certain private IP Address range as specified by RFC 1918.  So what of the other IP Addresses outside the scope (pardon the DHCP pun) of RFC 1918?  Those IP Addresses are set aside for Public use.  If you have money to spare, you could purchase one or several – the company I work for has quite a few.  But let’s stay on target.  Your own little Hagrid router has (at least) two ports or doors or gates.  One connects to the inside of your Local Area Network and has a private IP Address, most likely your default gateway on an IPCONFIG command.  And one connects to the Public Network, or the Wide Area Network (WAN) and has a public IP Address.  All your LAN traffic stays inside the confines of your safe little castle.  But if you want to go outside the castle, you go through the router and out to the public WAN.

And now the big news that will deflate all the magic – the Internet is nothing more than a bunch of interconnected networks (get it? INTERconnected NETworks?), reachable via public IP Addresses.

And now I’m feeling like the magician who just showed the whole world the secret to the big trick.  I may now be forced to wear a mask when I go to technical conferences out of fear of retribution.

The Overview of Teh Internetz (spelling intentional)

Here is an overview of how the Internet works:  You are at your computer and want to know exactly what a fox says, deep in the woods.  So you pull up a Web Browser to ask the all-knowing oracle, Google.

You type in http://www.google.com and like magic, Google appears.  But what is happening behind the scenes?  You’re not ready for the super nerdy details like DNS or TCP Ports or Routing quite yet, but we can generalize.  Your computer asks politely for Google, before realizing that Google is not inside your house, on your Local Area Network.  So your computer goes to the Virtual Hagrid keeper of the keys (the router) to ask for Google’s web page.  Your router then sends the request for Google across the vast public highway of the Internet before it arrives at the Address for Google’s virtual castle and asks Google’s virtual Hagrid for access.  He then gives you access to a computer inside Google’s private Local Area Network that provides access to the Google Web Page.  Then, like magic, Google appears on your screen.  This process repeats, as you then ask Google the question “what does the fox say?” until Google sends you a list of answers and you head joyfully off to YouTube to waste more time. 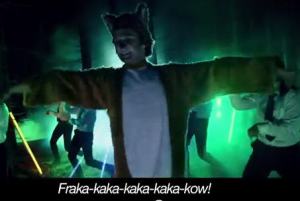 Now the disclaimers and qualifiers.  Please understand, this is an incredibly high level overview of the magic that takes place behind the scenes.  It’s very much like watching Star Wars on the big screen and thinking, dang, those special effects were pretty cool.  You can appreciate what you see but have little knowledge of how to blow up a virtual Death Star by dropping a proton torpedo into a two-meter wide thermal exhaust port.  Likewise, we can appreciate that Google just appears on our screen without fully comprehending how it got there.  My goal is to guide your baby steps in that direction – so you understand how it really happens.  Like any artist, we have to start with broad brush strokes before finalizing the masterpiece with fine details.

And here is the oversimplified overview of it all.  And I must confess, it was entirely hysterical giving Google a nice juicy Linksys router and old school Greenscreen computer.  The creepy bearded guy is Hagrid, complete with a little orphaned baby dragon and pink umbrella.

One thought on “On Routers, Hagrid, and Deadbeat Dragon Dads”

This site uses Akismet to reduce spam. Learn how your comment data is processed.