What’s That Sound? Homeschool Has Arrived

I had the privilege of taking an online Cisco course from my home this week. And as a teacher droned on and on about Enterprise Call Routing and Interactive Voice Response, I was also treated to the background sounds of home. Not just any home, either – this week our home became a school house. That’s right – homeschool has begun.

If Homeschool were a sound, what would it sound like? I suppose that would be a difficult question – much like saying “what does a rock concert sound like?” I could try to explain what a Rush concert was like by mimicking the guitar sounds, complete with air guitar, and by waving my arms around to signify the cool laser lights and pyrotechnics. But that falls short, a pale reflection of an amazing event. All that to say, this won’t give you the full effect, but it’s the best I can do.

Excited sounds from excited kids. Wailing and screaming over having to start / stop / pause school. Gloomy sounds from gloomy “I don’t want to get out of bed” kids. Wailing and screaming over missed problems. Jumping / stomping / marching sounds. Yelling sounds such as “____ took my ____” or “_____, stop _____”. And sometimes, the sweet sound of silence. I’ll assume those moments were filled with children happily reading to stretch their brains, or perhaps someone clubbed someone else unconscious. Either way, it was a nice sound. Those are the sounds of Homeschool.

A Reminder of Why We Homeschool

“Education without values, as useful as it is, seems rather to make man a more clever devil.” C.S. Lewis

“Ever more people today have the means to live, but no meaning to live for.” Viktor Frankl

Cool Computer of the Day

Dell charges WHAT for a computer? (Answer = way too much). This is a Raspberry Pi – a fully functional computer that can fit in the palm of your hand. For a mere 35 dollars, this can be yours. Slap an SD Card in this puppy and you can run Linux and be playing Minecraft on your Large Screen Television. It’s the ultimate customizable nerd project, I got one of these for my son Aaron for his birthday. The catch is you have to learn how to use Linux – then the sky is the limit.

You can plug a usb camera into it and program it as a spy device. You can program it as a media server to play your MP3 collection or stream Internet radio on a TV. I mentioned Minecraft, but you can play tons of games on it, or even convert it to a retro arcade machine using an emulator. You could build a robot out of Legos and program your Pi to do voice controlled activities. You could build a mini computer that mounts on your car dashboard. You could even hook it up to a home monitoring system and control your air conditioner, coffee pot, or door locks. The only limitation is your imagination – and perhaps your ability to search for ideas on Google.

Tribute to a Tortured Soul

He died on July 12, 1973, two months before I was even born and years later his legacy lives on. On the television screen is a tortured man, radiating pain, anguish and loneliness. He is forever cursed to walk the earth alone, finding but never keeping love, always in fear of who he is and what he will become at the next full moon. Larry Talbot suffers from a very rare and dangerous disease – lycanthropy, from the Greek lykoi, meaning “wolf” and anthropos, meaning “man.” You may know Larry Talbot by another name: the Wolfman.

The man behind the fur, Lon Chaney Junior, was forever engulfed by his father’s shadow. Lon Chaney Senior was a rather famous silent screen Hollywood actor, and the apple certainly fell close to the tree in his son. Lon is the only man to play the leading role as four separate classic Universal monster movies – he portrayed the Frankenstein Monster, the Wolfman, the Mummy, and Dracula. At the peak of his career he was well known for his lead role in Of Mice and Men, but for me he always shall remembered for the role of Larry Talbot. He is forever mired in his quest to overcome the evil that he becomes, trying to find redemption while forever destined to become the loathsome beast. It’s Jekyll and Hyde turned up to eleven. What an absolute classic.

Sadly, Lon Chaney Junior never really escaped his father’s shadow. His career was stuck in the stereotypical rut of second- or third-rate horror films. His last film, Dracula vs. Frankenstein, was a catastrophic flop. Lon’s later years were marked with alcoholism and various illnesses, until 1973 when he passed away from a heart attack. The tortured lycanthrope finally found rest.

As a child I vividly remember watching those classic black and white films on TV every Saturday afternoon at lunchtime, laying on the orange shag carpet of my living room. I remember the simplicity of those classic Universal monster films, the fear and excitement as Lon resurrected the Frankenstein Monster on-screen, or chased down a woman he grew too close to as the Wolfman, or stumbled about as the Mummy, or bared his fangs as Count Alucard (Dracula). Though these films may seem crude by modern film standards, they are forever fresh and exciting for me – they are the building blocks of today’s films. And Lon, rest in peace.

Hopeful Settling of the Mud

In my previous blog, I tackled the horrendous task of describing computers and their native language, Binary. I walked away from the scuffle feeling like I did not do the topic justice. So here again is Binary, this time using fun light switch pictures (thanks to our good friend, Mr. Photoshop). For this example, we’ll use only four bits or integers or light switches. Remember, we get the total by adding the “on” bits from right to left.

All bits are off, the value is 0 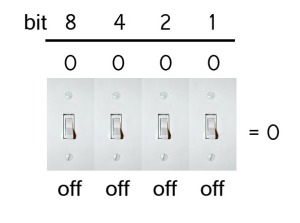 The first bit is on, all others are off, the value is 1. 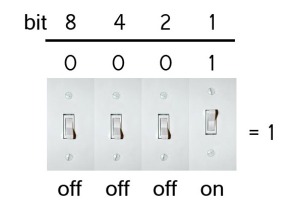 The second bit is on, all others are off, the value is 2. 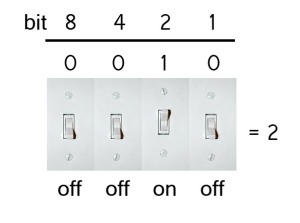 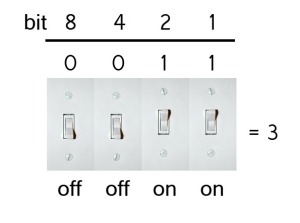 The second and fourth bits are on, all others are off, the value is 2+8=10 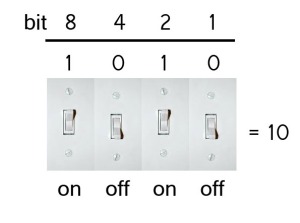 All bits are on, the value is 1+2+4+8=15. To go any higher than this (ie. 16) we would need another bit. This shows the reason for the doubling of bit values from right to left. 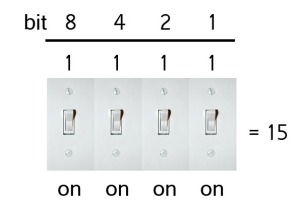 And so on, and so forth. You are bored and drooling on yourself, how embarrassing. I’ll stop now.

Next Up on the Blog

So for any of you who have a stop watch, I have pretty much blown the timeliness of this blog. It wasn’t written in stone, but the goal was to post within 24 hours of each other. That way, you could get a his-and-hers perspective of whatever is currently going on in the Domicile. But I pretty much blew it. Pooky has been kind, but I’ve noticed an increased frequency of “did you blog yet?” questions. So that said, I’ll post what I have now, and save more for later. I want to wade deeper out into the murky waters of technology into the area of a home network and what it is. I’ll introduce a cool word called “Stub Network” and what that means. And as always, I’ll try to relate to Homeschool as a Homeschool Widow… er, Homeschool Dad. That would make a great topic in and of itself – how do you, as a couple, make time for each other amidst the maelstrom of the school year? Are you two ships passing in the night just long enough to crank out another baby to Homeschool?

One thought on “Wolfmen, Raspberry Pi, and the Many Sounds of Homeschool”

This site uses Akismet to reduce spam. Learn how your comment data is processed.